Home » Uncategorized » Looking Back… at a Year of MAC.

Exactly one year ago today I stopped my second round, and what I was hoping to be my final round, of MAC treatment.

I have spent the last year of my life trying to figure out what to do about this, and all the layers of this that have come since that first re-culture.

This has meant a year filled with tears, learning how not to jump to tears, perspective, humility, investigation, and a trip half way across the country for the opinion of the current experts in the nation, navigating my way to be able (and almost not be able) to do that.  Upon arrival there it also ended up meaning an unplanned extended stay there.  My time in Denver, and all that lead up to it, was challenging, beautiful, hope filled, hard, and life giving, a smorgishborg of emotions.

I had hoped for some resolution in terms of what to do about MAC more immediately from the trip, but in total Kori body fashion… it’s complicated.

Last night, after just two days before having had a convo with my local doctor where we were thinking maybe I might be getting some distance from the urgency of treating again, I got some unexpected bummer news.
My culture that I handed in the day before was smear positive.
(This means a strong and visible positive for MAC and is NOT the news I wanted or expected.)
There were no tears. No big reaction at all.
Just a quiet sobering, “Well, that sucks.” followed by a note to my doctor and an “Ok, what’s the next best step now”.

I’m actually a little embarrassed that when I look back at this last year, that this, this dance with MAC, and what I’m doing around it, has the most steadfast presence throughout.
I have not let it take me over, or own me, but it has been more significant than I would like.
2017 feels like the year of deciding what the heck to do with MAC… and my life around it…and maybe if I’m honest, also just plain deciding what to do about my life…

So there it is. 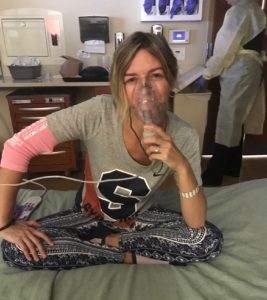