This stuff never gets easier.
I have not yet had the heart to write here about her passing, but today, I try.

Olivia was such a special, sweet, and caring young woman.
We first met at a Great Strides walk. She was just a little peanut at the time.  I was dancing in my purple and gold sparkly hula hoop in celebration of “The Purple K’s”, my walk team that year.
Liv and her friend came over and I began to show her, at our best respectful infection control distance, how she could hoop too.  I was so touched by her even at this first meeting.  I couldn’t help myself.  She found her way into a special place in my heart and I would soon “adopt” her as my “little cyster”.

After that first intro I found contact info for her mom, Sue (via a secret earth angel who also really wanted us to connect). I reached out to Sue and asked what Liv’s favorite colors were and if she would mind if I made her her own hula hoop.  I shared how I was using mine for airway clearance and promised to wash my hands while making and clean it before giving it to her.  Sue said yes :).  We arranged a surprise visit for after Liv’s next clinic visit so I could gift it to her.  She was so darn cute!  I loved seeing her spin it for the first time.  It made my heart so happy to share with her in this way.  I don’t know who was more excited about the surprise, her or me, haha.

After that time we remained in touch, a few precious times in person, but mostly safely via message.  It’s funny, the day before I found out she passed I was saying to Rick that I was feeling her and wanted to reach out and see how she was doing after we got home (we were on a LONG drive back from NY to CO).

Liv went through SO much, which is often the case with many who live a life with CF, but it felt like Liv got so much more than her fair share.  Although “fair” is not a word that seems like it has any place in any dialogue about CF or someone’s suffering.

What I want to highlight about Liv though is her spirit.  Liv was the embodiment of kindness, a true sweetheart, and despite her little pint size, by far one of the strongest I know.  What she went through and came out with a genuine smile, most would be defeated by.

Even as she was meeting the challenge of the intensity of living with CF, Liv was always thinking of how she could support others.  She created Liv Luv Breathe care packages to help brighten the days of other girls facing tough times and medical care.
She actually also reached out to me, before forming the foundation, to ask about getting some Booster Jots for a friend of hers who was in the hospital.   Of course I said “absolutely” and again, was touched by her desire, sweetness, and initiation and we figured out the best way to get it delivered.

Liv was a dancer, ran track, always a caring friend, was so close with her mom, and had a smile that made others smile.  She was just such a sweetheart.  I don’t know a better way to say it.

When I think of Liv I think of a Sunflower, rising up to shine that radiant little face at the sun or the others she shares a field with.
The day after Rick and I found out Olivia had passed, with heavy hearts, we continued our drive.
And guess what?! We ended up passing through a big long span of nothing, but wild and free, SUNFLOWERS.

Liv in her hoop!  (I also have a pic of us that day that for some reason won’t upload so maybe later…) 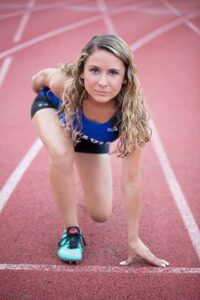 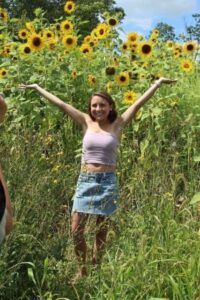